If only there was a simple answer, right? It might be argued that as soon as actions are somewhat static, that’s a process. Knowing something about human behaviour through one might argue that there is no such thing as static actions. And thus so hard to create and manufacture change that i sin any way dependent on human interaction.

Not talking about system processes here though even they are the subject of non predictable human behaviour.

In this thread at LinkedIn the pros and cons of process mapping is discussed and it is nice to see such interest and difference in opinions.

Let’s make sure we’re talking about the same thing. Firstly, there is a difference between the process and the method (steps) used in the process. A process map is a description of the steps of the process, i.e. the method. The process is the thing that executes. It’s dynamic. One execution can produce different results from the previous or next. The process map, which should really be called the “method map” is a description of the steps. It is certainly important but it doesn’t portray anything but the steps, as perceived in a standardized environments. It doesn’t show variation as executed by different people and so is not fully representative of what actually goes on. It doesn’t show dynamic behaviour. It doesn’t show “outcomes” and how they relate to factors in the process.

You could draw a process map to the finest level of detail and not discover where the impacts of risk are, or whether or not the process is achieving maximum performance, or the six sigma capability of the process. The process (method) map is an element in understanding the full behaviour of the actual executing process. My hypothesis, so to speak, is that although it’s still a part of the total picture, the more complex the process especially in execution, the less of the total picture can be gotten through process mapping.

The entire thread can be found here >>Why process mapping is not an effective tool for today’s problems.

It is a closed group; Business Process Improvement and Change Management

EBG is managed by Anna & Lars - partners in business and life. Contact us today with any type (business) related questions! Contact details below or use the LiveChat function right now. 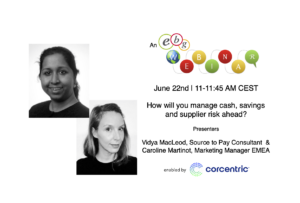 As the economy begins to bounce back from the global health crisis, companies are working hard to rebuild and re-assess how to drive growth. Procurement teams must adjust to a world focused on cost-centric measures as companies rethink the role of procurement to focus on cash management, savings and supply risk mitigation to enable growth […]

Download the program by clicking the image below – visit source2pay-summit.com to stay updated 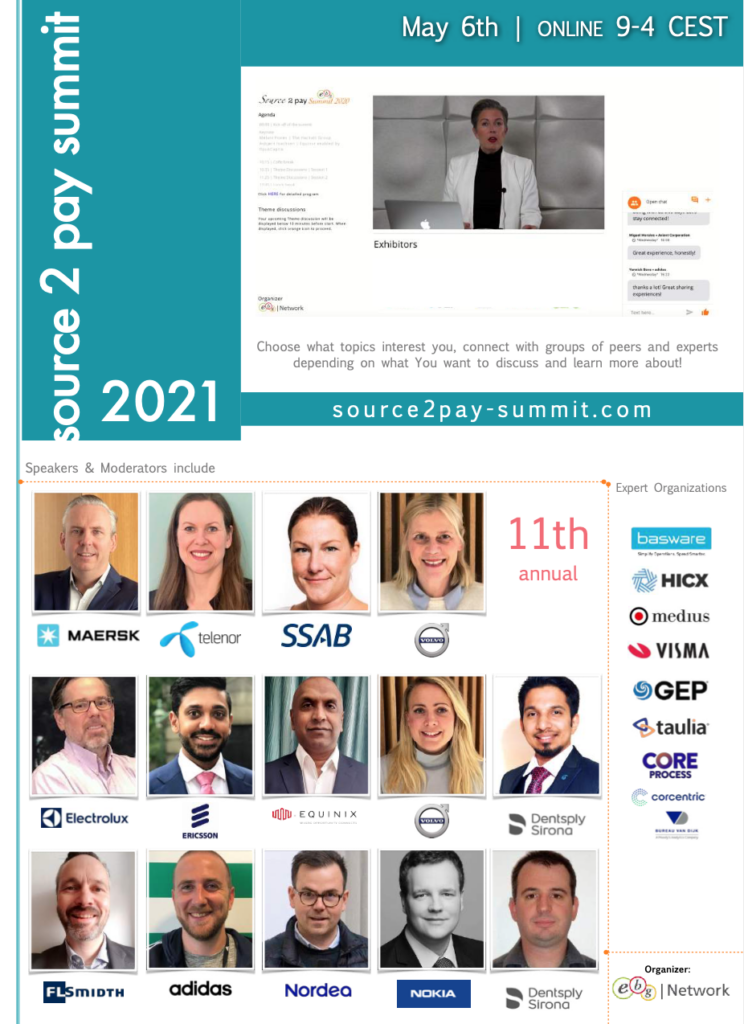 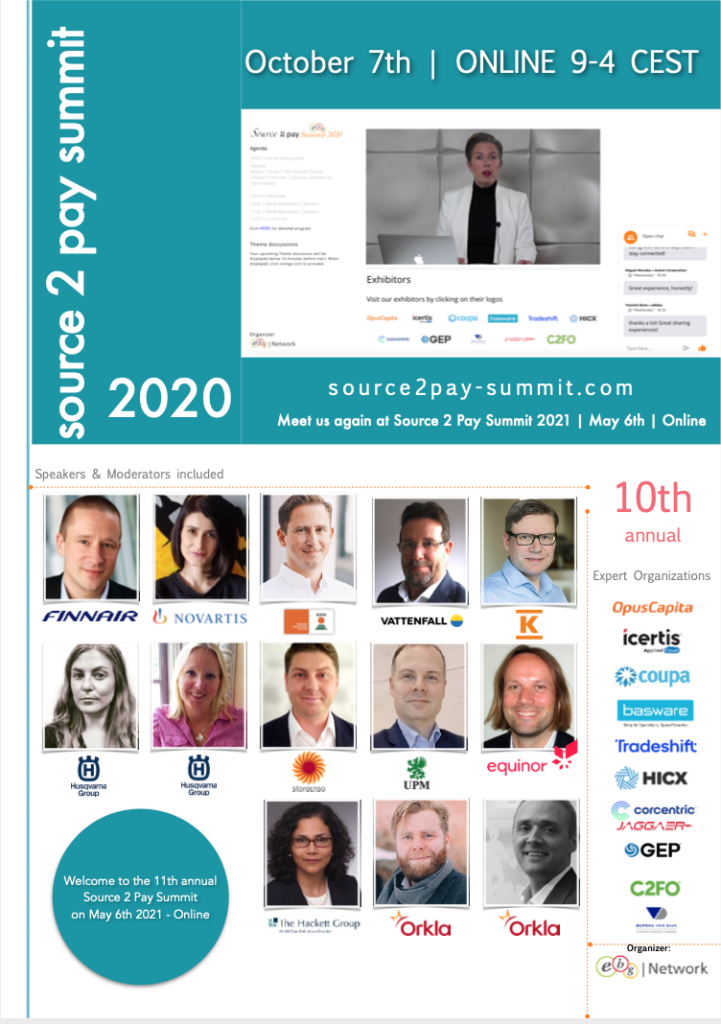 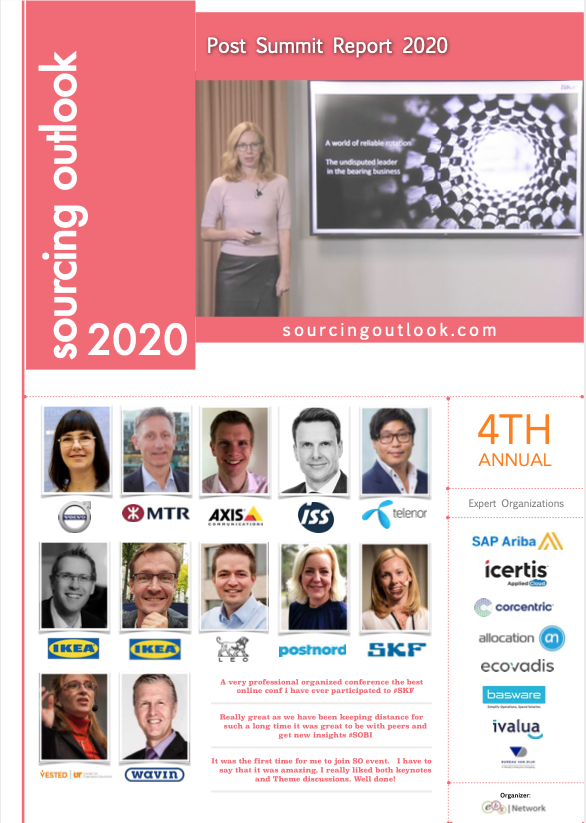 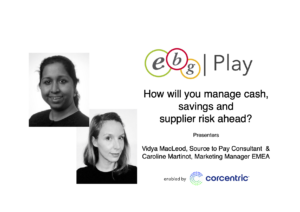 The past year and a half has brought with it market changes. Changes in where supplies come from, who buy it and how it is followed up upon. Corcentric have followed the market development carefully and through research they identified three areas of especial interest for businesses ahead; cash, savings and risk. Here you can […] 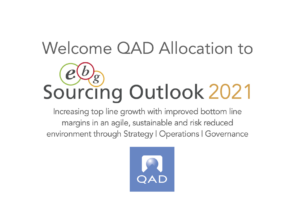 EBG | Network look ahead toward an exciting autumn and winter continuing to bring people together. On November 25th sourcing, procurement and supply chain professionals will meet online. Then the 5th Sourcing Outlook will take place. Meet meaning truly meeting based on what each individual find challenging, what each company want to develop ahead. EBG […] 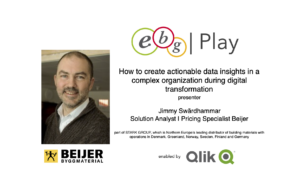 This session have several layers. Individual courage, corporate visions and market challenges. Many industries are facing changing market environments due to raw material shortages. Challenges keeping up to customer demands asking for shorter delivery times and price reductions. Finding ways to ensure data streams are up to date, used as intended and continuously improved. Qlik […] 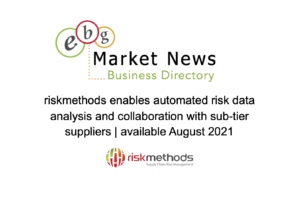 riskmethods is making it possible for enterprises to gain sub-tier visibility and collaboratively manage supply chain risk with their business partners, empowering them to increase resilience. This is done through riskmethods Supply Risk NetworkTM, which will become generally available as of August 2021 On June 15th, more details will be disclosed, but below a short […]

As the economy begins to bounce back from the global health crisis, companies are working hard to rebuild and re-assess how to drive growth. Procurement teams must adjust to a world focused on cost-centric measures as companies rethink the role of procurement to focus on cash management, savings and supply risk mitigation to enable growth […]