Companies with global operations must comply with new and changing trade agreements and regulations. This ensures ethical practices in international trade around the world. In most of Europe, trade is governed by the EU standard, which defines policies based on EU’s founding principle of free trade among its members.

During this webinar we discussed the changing landscape of international trade and compliance. Especially focusing on transaction rules and regulations on a global scale. Drawing from experiences from Gustav Gnosspelius, Senior Network and Technical Presales consultant and Kent Westerlund, Senior Presales consultant at Basware.

View the On Demand session

It is clear that even though cross border trade has been made easier due to collaborations such as Peppol, there are still many regulations to consider on a country by country basis. Not the least from the perspective how governments want to control domestic and international trade – especially what tax is being exchanged. View the On Demand session >>here or click the image below.

In the On Demand session you’ll also learn about;

Have companies had any bigger changes to their international trade set up?

This question can mean several things. It can mean what it looks like – that many have had Covid-19 related changes to their international trade set up. It can also mean that the even higher number saying they haven’t had any changes – comes from a situation where that group of companies to a large extent don’t have too much international trade. It can of course also mean what it says – that they do but just haven’t had any changes.

Do you keep track of supplier risk and performance?

This is a topic most will remember as THE topic of 2020. Companies have faced supply chains – both physical and financial – being broken due to the global crisis (cannot bare to write the C-word). It has become evident how insightful businesses have really been.

Doing a risk assessment in the beginning of a relationship is usually the norm. Checking financial strength probably the most common. The crisis have shown us how reliant supply chains are on the entire network of suppliers. For sure those networks have traditionally not been penetrated with any luck. This will for sure change! The technology is here.

Basware offers the largest open business network in the world and is the global leader in providing networked source-to-pay solutions, e-invoicing and innovative financing services. Our technology empowers organizations with 100% spend visibility by enabling the capture of all financial data across procurement, finance, accounts payable and accounts receivable functions. Basware is a global company doing business in more than 100 countries and is traded on the Helsinki exchange (BAS1V: HE). Find out more at basware.com.

Background of the PEPPOL Project

The Pan-European Public Procurement On-Line (PEPPOL) project was a pilot project funded jointly by the European Commission and the PEPPOL Consortium members. The PEPPOL project was initiated in 2008 with the aim of simplifying electronic procurement across borders by developing technology standards that could be implemented across all governments within Europe. The overall objective was to enable businesses to communicate electronically with any European government institution in the procurement process, increasing efficiencies and reducing costs.

Through agreement on specifications for cross-border procurement processes, the PEPPOL project has contributed to the development of a pan-European, standards-based IT infrastructure. PEPPOL has not replaced, but built upon, the existing strengths of national eProcurement systems by using information and communication technologies to enable them to connect with each other.

Many of the then active professionals in Peppol are still active. Below you find a couple of old EBG interviews! How much have changed in eight years?

EBG is managed by Anna & Lars – partners in business and life. Contact us today with any type (business) related questions! Contact details below or use the LiveChat function right now. 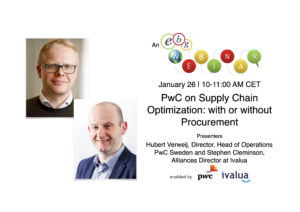 Leading companies go beyond functional efficiency and shift into an end-to-end oriented ecosystem. Champions reap more benefits from investments into advanced capabilities and outperform their peers in both revenue generation and cost reduction. Ad digital to the mix and you get Digital Champions as PwC call them. Explained in a recent study including 1,601 senior executives from companies […]

Once again we meet online. In smaller groups, moderator led discussions based on what each moderator want to discuss. You choose which sessions You want to join and voilà – amazing experience exchange enabled by EBG | Network can take place. Register via sourcingoutlook.com

Sourcing Outlook is a non industry specific gathering, nor do we do divide direct/indirect procurement – the world simply does not look like that any more. Here professionals come together to share experiences on a level all can relate to without being too generic. Program found >>HERE 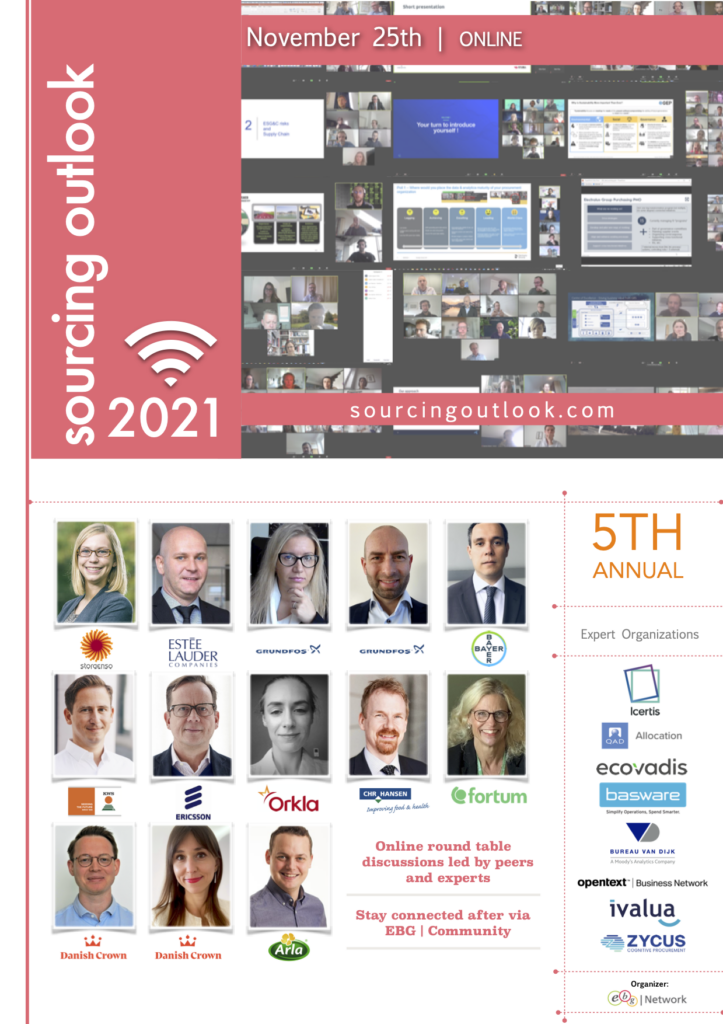 Below is what a day with us look like: 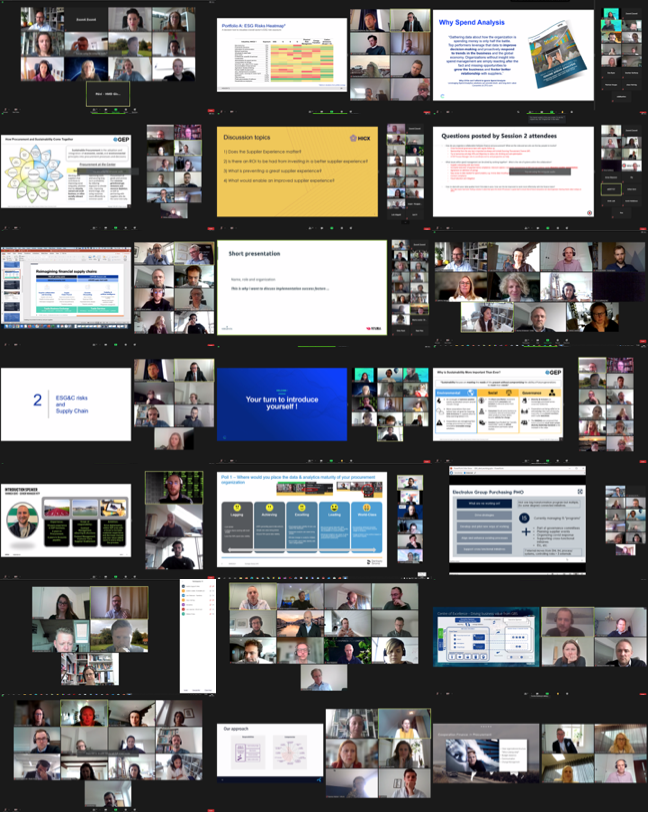 Pick and choose round table discussions to join 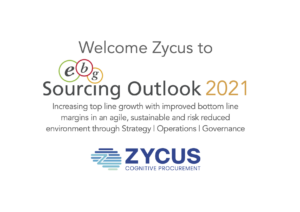 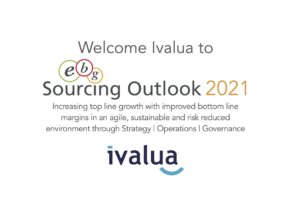 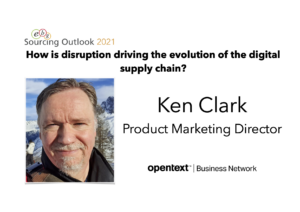 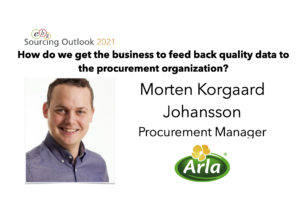 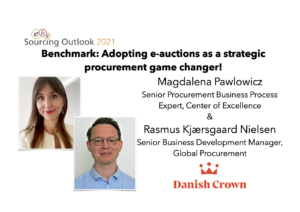 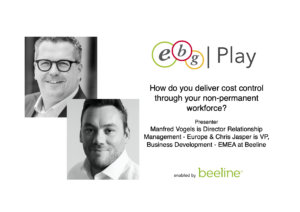 43% of the average enterprise’s overall workforce is now considered contract, contingent or non-employee and is built on freelancers, independent contractors, professional services and traditional temporary workers – up from just 20 percent a decade ago*. That is a staggering fact. During a recent webinar with Beeline facts and figures were run through. The direct […] 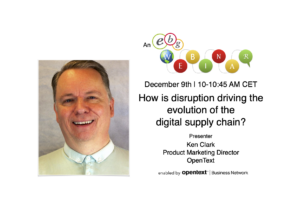 The supply chain disruptions seen in the past two years are staggering. For multiple reasons supply chain and procurement have had to work magic to ensure customers get what they want when they want at the cost agreed. Not always succeeding. Sometimes realizing that the channels used and the supply based worked with will not […] 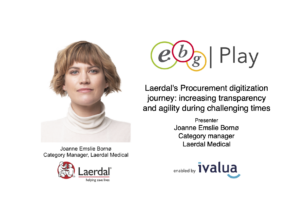 For what reasons are you digitizing and digitalizing – what is you digitization journey like? Reducing manual labor, minimizing paper, increasing information quality, speeding up decision making? During a recent webinar we got to learn from the Laerdal transformation journey. Joanne Emslie Bornø, Category manager at Laerdal Medical gave us a step by step run […]

EBG | Network welcome Zycus as an Expert Organization to Sourcing Outlook 2021. The summit take place on November 25th, for the final time online. Online meaning up to 40 round table discussions being enabled during the day. EBG connecting peers and experts to draw from each others experiences in smaller groups. You who join […]

EBG | Network give a warm welcome to Ivalua joining Sourcing Outlook 2021 as an Expert Organization. On November 25th you who join the summit – the FINAL EBG Online Summit – can join their Theme Discussions. Meet with a smaller group of peers interested in the same topic as You. EBG connect you prior, […]